Dubrovnik in Croatia has these days become a favoured holiday destination for lots of Brits. And Americans. And Germans. And Roman Arkadyevich Abramovich, Russian oligarch and owner of English Premier League football team, Chelsea.

Worth a jaw-dropping $9.1 billion, which according to Forbes, makes him the 137th richest person in the world, his $1.5 billion, 557-feet, super-sleek super-yacht Eclipse can usually be spotted sailing around off the stunning Dalmatian coast for a couple of months towards the end of each summer – a ritual performed for the last three or four years apparently.

Strangely though, he is said to never actually disembark and avail himself of the local delights, preferring instead to simply float around different parts of the bay and view things from a distance. Which seems a bit of a shame really. But maybe having all that money isn’t everything it’s cracked up to be.

Eclipse, which was custom-made to Abramovich’s own specs in 2010, is for example reportedly kitted out with a missile defence system, armour-plating around his master suite, bullet-proof windows and an anti-paparazzi system.

This laser-based system can allegedly detect the electronic light sensors of digital cameras, which it targets with a beam of bright light to overexpose any privacy-busting photos having the audacity to be taken – an ideal accessory for anyone who guards his persona as international man of mystery as jealously as Abramovich does.

But just in case you come away with the mistaken notion that the guy is all work and no pleasure, the yacht also boasts a dedicated disco hall, two swimming pools, two helicopter pads and a mini-submarine, doubtless so he can enjoy the local aquatic life without having to mix with the rest of the tourist hoy-polloi.

In fact, when first built, this extravagant plaything was apparently the largest private yacht in the world – although it has since been usurped by younger model, Azzam, thought to be owned by Shiekh Khalifa bin Zayed Al Nahyan, emir of Abu Dhabi and president of the United Arab Emirates.

Not to be outdone though, there are now rumours that Abramovich is in the process of going one better and having the ship to beat all ships delivered into his tender care next year.

Anyway, Eclipse isn’t the only boat of stature that can be seen sailing around Dubrovnik’s shores by any stretch of the imagination. Astoundingly for a small, essentially medieval-turned-Baroque town following its rebuilding after a devastating earthquake in 1667, half again of its entire population of 40,000 souls swarms in each day during tourist season, many being disgorged from gigantic cruise liners the size of small cities. 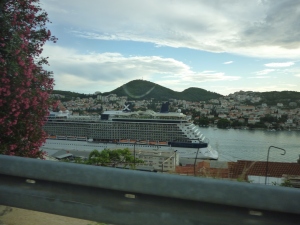 Each of these extraordinary behemoths holds between 2,000 and 3,000 passengers and roughly the same number again of staff. Thankfully for everyone’s sanity after five or six years of madness however, a maximum of three are now allowed to dock per day, although no such limits have been imposed on smaller ships in the 1,000 or so passenger range.

Which all makes the Old Town, a Unesco World Heritage site known as the ‘Pearl of the Adriatic’, a bit of a crush to say the least – or between the hours of 10am and 6pm anyway. And we went there at the end of September so I’d hate to think what it was like in the peak months of July and August, especially now that Game of Thrones worshippers have added themselves to the throng.

Doubling as King’s Landing in Westeros, the capital of the Seven Kingdoms, in the HBO epic fantasy series, the city has as a result become a mecca for avid fans who can even take a three hour walking tour to treat themselves to a unique modern take on traditional gems.

It’s all a far cry from the quiet backwater that I first visited in the mid-1980s when Croatia was still part of the post-war socialist state of Yugoslavia and Josip Broz Tito reigned supreme. Then it was all about women in long black dresses and headscarves selling oranges outside their homes and taking produce to market by donkey. How times have changed.

But the scrum that Dubrovnik can unfortunately become doesn’t ever seem to put people off – and in many ways you can see why. Surrounded by two spectacular if exposed kilometres of stone battlements that everyone walks around for the bargain basement price of 100 Croatian kuna (about £9.65), this exquisite city jutting into an azure Adriatic Sea with its terracotta-roofed Gothic, Renaissance and Baroque churches, monasteries and palaces, truly is picture postcard fare.

And its seafood is equally magnificent. With everything from sea bass and gilt-head sea bream to squid and octopus on the menu, it’s all about fresh ingredients cooked simply and served with tasty side orders of salad, rice or French fries. Other traditional delicacies also worth trying include cevapcici, which is a kind of highly seasoned rissole, and chicken or lamb slow-cooked under a metal lid called a peka that is covered with hot embers.

Equally as ubiquitous, meanwhile, are the excellent pizzas, pasta dishes and ice cream in myriad flavours of a quality rarely experienced outside of Italy – a line-up that may at first glance seem rather odd. But given the proximity of its Mediterranean neighbour to northern Croatia and the powerful commercial relationship engaged in particularly during the fifteenth and sixteenth centuries between the key maritime trading centres of Dubrovnik and Venice – which incidentally apparently tried to invade the former a huge 70 times – it’s possibly not quite as strange as it seems.

Also not to be missed though are Croatian wines – and the reds in particular. Although a bit of an unknown quantity in the UK for many, the industry is, along with olive-growing and citrus fruit production, a traditional and well-established one. It’s just that the vast majority of its outcomes are drunk at home and the country’s export market is tiny, which means that the average European simply isn’t particularly familiar with its delights – or the tongue-twisting names assigned to its grape varietals and brands.

Because it must be said that words belonging to the Slavic Serbo-Croatian language, which is spoken in a mutually understandable way all over the Baltics, do seem to include an unreasonable number of consonants – a case in point being the white wine grape “Trbljan bijeli” or a red wine version “Grenas crni”. Which is all a bit daunting initially.

As is the apparent shamelessness of rotund, middle-aged, Croatian men wearing tiny, weeny little Speedos at the beach in our holiday retreat of Zaton, about eight kilometres out of Dubrovnik itself. But over time, I can only say that I truly got to admire the lack of body consciousness displayed by both Croatian genders – a state of being so far removed from the average set of constraining British inhibitions as to be deeply impressive.

Because when push comes to shove, the fairy tale exotica of Dubrovnik and Croatia really are best enjoyed if you simply take them as you find them.